In my Graphics II class, the whole class was assigned to work on infographic and social graphic design for our client Ulman Cancer Fund. Specifically, we were designing around statistics and information regarding their 4K for Cancer yearly cross-country run and cycling event.

For the infographic, I designed a series of icons that I used to represent the data information in a fun and visually appealing way. I designed items such as a house, a graduation cap, a gift bag and more. All of the icons are the same simple concept with repeating elements, such as a heart, to keep them cohesive.

I kept with the Ulman color theme of two shades of blue and one shade of yellow, but I threw in a splash of red to create diversity in the image and draw the eye downward. I used Alfa Slab One and Ostrich Sans to have thick and thin textual elements throughout the graphic. The piece was made in Illustrator.

In addition to an infographic, we were instructed to create one social media graphic based on one statistic from the infographic. I chose to create a new version of the “258 communities visited” statistic. Instead merely taking the square of the infographic and translating it into a social post, I instead used a yellow background with a white triangular grid texture and a red heart on the house. The triangular grid texture was intended to be similar to other graphics they were already featuring on their page to keep their image consistent. The graphic was made in Illustrator as well. 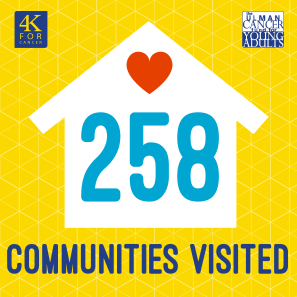